The area is located in West Cumbria, near to Workington, and covers the Moss Bay ward and Salterbeck. It is a coastal area quite isolated from the rest of Cumbria. Travel by public transport to neighbouring towns and cities is both difficult and expensive and car ownership is low. The local steel works closed many years ago causing widespread and long-term unemployment and residents have been hard hit by social and environmental decline ever since.

We called ourselves ‘Solway Views’ and we brought together local residents, local government officers from Cumbria County Council and Allerdale Borough Council, representatives from the Workington Academy and third sector organisations. Over the duration of the NRP (2017 – 2019), ten local residents served as Resident Advisers and an estimated fifty other residents participated in NRP events and activities. The Solway Views group included people who were long-term unemployed, local students, and people who were working at the time and also looking for another job. We also collaborated with ‘West Cumbria Works’ which represented several major employers. St Mary’s Church Westfield was the local COREN organisation helping to recruit and support local residents to get involved. The Cumbria Health and Wellbeing Forum acted as the Local Oversight Group for the local work.

Bringing the system together

Between January and September 2017, we held a series of six Resident Conversation Events held in different venues across the NFL, involving residents, stakeholders and local authority professionals.

In these events, we identified the following local concerns:

Residents were especially worried about the lack of employment opportunities for themselves, family members, friends and for their communities. People of all ages felt they had little chance of getting a job, especially in the new industries that had opened locally because many of the jobs required skills and qualifications they did not have. On this basis, the Solway Views group decided to focus on improving the employment prospects of local people and on enhancing the economic resilience of the area.

A very rapid review on ‘Employment vulnerability in remote areas’ was completed by CLAHRC NWC for Solway Views.

Between September 2017 and January 2019, we undertook a participatory enquiry, which included a series of focus groups and community events, to understand and document local people’s experiences and difficulties with employment issues. 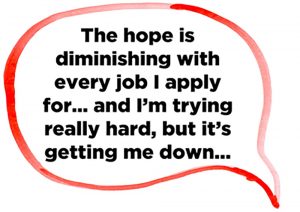 Capturing and disseminating the findings

In June 2018, we organised a community event, which we called Spring Fling, to present and test findings from the participatory enquiry and to attract interest from the community in our work.

We commissioned an artist, Len Grant, to portray visually the stories collected by the enquiry work highlighting the hardships that local people faced when looking for and when in employment. The products of this work were an eye-catching booklet and a poster exhibition, both titled ‘Work’. Their aim was to give local policymakers and employers a unique and memorable insight into some of the real life problems local people faced.

Between January and September 2019, the Solway Views Group produced two short videos in which residents present the area, their own employment journey, their role in the NRP, and their achievements, and share some of their personal favourite moments in producing this work. Watch them here.

The booklet, exhibition and videos were presented to a range of audiences including to a full meeting of Cumbria County Council and a number of CLAHRC NWC events.

The whole experience of conducting the enquiry and sharing it with policymakers and employers was contributing to the emergence of a new feeling of collective identity and a commitment to improve the area. A community celebration event was scheduled for September 2019 to celebrate the success of the local area work and its achievements including receiving the CLAHRC Award for Art and Storytelling in Health Inequalities Research.

The Allerdale Work and Skills Group

The Solway Views group started to talk to some of the big, local employers through the ‘Allerdale Work and Skills (W&S) Group’. This multi-sector group was set up by local authority officers. Its aim was to improve the employment prospects of local people. Its formation was a key achievement for the NRP as the group was set up as a direct consequence of the local enquiry work within the NFL. The W&S Group brought together key partners from all sectors as a forum for improving inter-sectoral approaches to employment for the area. The W&S Group intended to meet quarterly and work in collaboration with Solway Views beyond the end of the programme.